Before proceeding to read our full William Hill review, we want to inform you that this review was performed by our regular Saturday horse racing tips feature columnist, Seymour Biz.

We provided Seymour Biz with a small betting bankroll to fully test William Hill sportsbook offering. All views are his own and he covers 10 key areas of the William Hill platform and also keeping a diary of his betting whilst reviewing the site.

Our aim with this review is to give our readers a 100% independent appraisal of this greatly revered online betting site.

Jump to the specific section by clicking on the link.

How easy was it to claim the bonus?

I have had a William Hill account for several years and it is my most used method for online betting. I can vaguely remember the signup process and it was very straightforward. All it required was my name, address, phone, bank details, etc. I was able to complete it in a short time.

I don't recall completing a KYC process where I had to provide proof of identity and address but  if you are asked for these, you should have the relevant documents to hand (i.e. either driving licence or passport to prove your age and identity, and then a recent utility bill or bank statement to prove your address - do not worry, they just want to see your address here, so you can blank out private financial information. Picture taken with your phone camera will be enough - doesn't need to be a scan in case you are wondering).

Remember to read the terms and conditions as falling foul of these will invalidate your bonus. I have found this offer one of the most generous and straightforward of any of the betting firms.

Can you trust William Hill?

The company sponsors many of the top horseracing fixtures in the UK and besides these, they take great pride in being the Official Partner Of Tottenham Hotspur. Hills are also the main sponsors of the Scottish Cup and the World Darts Championship.

I have found customer support somewhat haphazard with some companies but this is not the case with William Hill. They have a message service which drops messages into my inbox periodically to let me know of any new offers available. Added to this, they have a Twitter account where you can tell the world and his wife of any problems you have with the account.

However, their main contact for customer service can be found at the bottom of their list of sports covered on their homepage where it says Contact Us. I clicked on that and was then shown a box to ask a question and I put in “Can I use my account in France”, knowing full well I can’t. I was then given a list of answers which included one showing Country Restrictions.

If I was not satisfied with this and wished for further answers, I am then offered an e-mail template to send a message.

If you think that this is quite slow, you can click on Call Us and you will then be offered two choices, Queries on your Online Account and Queries for Shop Customer Service. The Online account section directs you to Hills Chat service which I have found excellent in the past. The Shop Queries provides you with a phone number along with operating times where you can actually speak to a person. All this sounds long-winded written down but it really isn’t.

Hills screen is really easy to navigate and the services are easy to find.

William Hill may look somehow old-fashioned compared to some of the newer bookmakers in the market and while that may be the case, it in no way detracts from its simplicity to understand and ease of use. As can be expected from a company such as this, they cover a wealth of popular sports, including football, boxing, cricket, rugby and many more. However, they do not cover some of the lesser-known sports shown on other sites such as table tennis, surfing, cycling, etc. 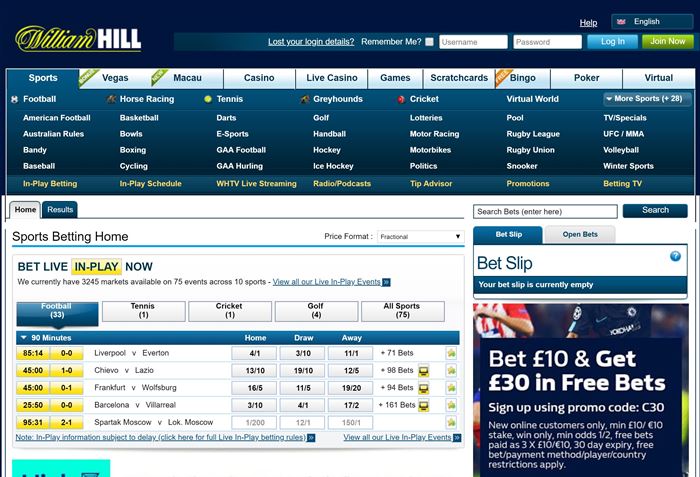 I have always found Willian Hill to be quite conservative in their pricing of markets. They do not always offer the best odds on Oddschecker but neither are they the worst.

I checked their prices for the Skybet Chase at Doncaster and while in most cases they equalled the best price on offer, in one case the second favourite, only Hills and Corals were half a point better than their nearest rivals. However, their pricing of the two outsiders was fully 5 points worse than most of their competitors and this seems to be the case on most occasions.

Turning to football, William Hills offered 33/1 for Newcastle to win 2-0 and 40/1 was readily available. They were best priced at 11/1 for Arsenal to draw 0-0 and similarly best priced 12/1 for Liverpool to win 3-1.
Overall, Hills comes out of comparison reasonably well except in the case of big outsiders where better odds can be found if you look around.

Do they offer in-play betting?

William Hill offers in-play betting on all sports they cover with the odds being updated minute by minute. It is difficult to compare these prices as they change so frequently as you toggle between the sites but all in all, the prices seem to be on a par with other bookmakers.

Are there offers available for existing customers?

Firstly, with my most used bet, the Lucky Fifteen, Hills will pay double the stake for one winner. This is not quite astonishing, but it is certainly better than some companies who only pay out at single stakes.

They have several other promotions that change on daily basis.

They have a Bonus Drop where you can win various prizes; I won 5 free spins on the slots, but unfortunately, the return was nil.

Hills regularly offer Extra Places on certain horse races. These are featured in the racing pages in newspapers. On their site, they have Money Back Second at certain meetings, usually up to £10.

Also, there is a Scratch of the Day where enhancements are offered as well as Premier League Specials with enhanced odds. So, there is plenty on offer with their regular promotions.

Is There Fast Withdrawals?

I used my debit card to deposit cash and it went in instantly. For the withdrawals, they took 2-3 days to land into my account.

Their Contact Us page has more details on this- you get all the questions you might have regarding deposits and withdrawals answered.

Is it easy to navigate on your mobile phone?

I have found Hills to be highly mobile-friendly. Regarding my betting, with all the different multiple bets, it was easy to find and navigate on the website using my tablet. However, some of the regular promotions such as Scratch of the Day and Bonus Drop did not load properly and are unavailable on it.

Do they offer live streaming?

Live streaming is available on my tablet for several sports. My main interest is in soccer and horseracing and I regularly watch these on it. I am under the impression that they have upped their racing offerings and the streaming seems much improved with all the meetings covered whether you have a bet on a race or not.

I started with a £30 pot and started my betting at the Saturday meeting at Doncaster with the Seymour Biz tips.

There were only two selections as Cheltenham was off and my William Hill account informed me of that. The two selections were Ask A Honey Bee and Canelo and I added Financial Outcome to make up a 50p Win Patent. Canelo ran well to be placed but that was as close as I got.

On the Hills site, depending on how many horses you enter, you click on Show Multiples and you are shown the types of bets for that number of horses, simple.

Next bet was Paul Kealy’s tips, which I was not confident about, so only wagered a 30p Patent. My scepticism was well-founded- another £2.10 down. I picked out three more, I fancied Cap Du Nord, Mercian Knight and TeesComponentsLass. This time in a 25p e/w Patent, easy to place an e/w bet, just click on the box at the side of the selection.

The first two were placed and Teescomponentlass was just beaten a length into fourth but a return at last, £1.99, would have been £7 if she had got third.

I then tried a small single on an outsider, 40p e/w on Fenny Brook, again very easy to place the bet. Unfortunately, the mare lost a shoe and finished down the field, I lost 80p.

I thought I would try some midweek racing and picked out a Lucky 15, again easy to place the bet, the selections were Red Lion Lad, Llantara, Oxwich Bay and Welsh Saint. I had a 20p Win bet, three were placed but not good enough and another £3 gone.

Up to now, I have laid down £13.40 for a return of £1.99, not good enough. And so to Saturday and again I picked out three of Seymour Biz bets as Wetherby was off. These were Kiltealy Briggs, Newtown Boy and Billy Bronco. None of them ran well in the heavy going and my 50p Patent was squashed into the Edinburgh mud.

Pricewise tips were Glan y Gors, Yala Enki and Calipso Collonges, so I put them in a 20p e/w Patent. Tom Segal was as bad as me and none were even placed. Another £2.80 gone and my pot is dwindling quickly. So, I tried Paul Kealy’s tips in a 20p Lucky 15, at least he had one winner. Alnadam priced at 10/3 due to Hill’s Best Odds Guaranteed so a return of £1.53.

Sunday was the second day of the big Dublin Festival at Leopardstown and this was well covered by Hills, including video of the races. I had two 20p e/w Patents, Blue Lord and Farclas were placed in one bet and returned £2.68.

My finale was on all the hot-pots in Ireland, Quilixios, Appreciate It, Monkfish and Brandy Lovein in a £2 accumulator. The first three won and Randy Love let me down running third. So my tally on one of the poorest fortnights I have had for some time was a layout of £30-30p and a return of £6.20, an 80% loss, an absolute shambles.

The William Hill site was as easy to use as it usually is and I had no problems finding my selections and the bets required. The returns, meagre as they were, were paid immediately and I was able to review my bets in the History section. Hills may not have the colourful graphics of some of its competitors but it is simple to navigate and I consider easy to understand for any new customer.

Does our reviewer recommend this betting site?

As I have used William Hill as my primary betting account for years, I may be biased with this review. However, I would not continue to use a site if I did not like it. For example, in my review of MansionBet, I just could not recommend it so I will say it like it is. As I mostly bet on football and horse racing and like to watch streaming on my tablet, the William Hill site just works perfectly to match my needs. The fact that they have lots of extra promotions for regular punters is the icing on the cake.

I would definitely recommend William Hill to anyone that is new to online betting or punters looking for a new bookmaker.