The Chelmsford racecourse is quickly becoming a highly sought-after racecourse in the UK. As of today, this racecourse is almost a decade old. And there is a promising aura of excitement around it. Additionally, it is home to a few renowned horse races in the UK.

Find all today's latest free horse racing tips including tips for Chelmsford City from the most respected professional tipsters from UK and Ireland. Below are also links to all the most popular tipsters who supply selections for the races at this UK race track.

Nap of the day

In the late 1990S, John Holmes, a distinguished entrepreneur in Essex, saw an opportunity to open a racecourse.  Essex was a populous county with no racecourse to show. Racegoers had to travel for about 50 miles to the nearest racecourse in Newark.

In 1997, he joined forces with his son Jonathan. And together, they bought the Essex County showground. Their vision was to turn it into a state-of-the-art racecourse that would attract thousands of racegoers. They named it Great Leigh’s Racecourse.

John Holmes would have to contend with some problems before eventually commencing constructions on the ground. By 2006, they had constructed a 10,000-capacity grandstand. The Ryder Cup took place on this racecourse but it was evident that the facilities were not the best. This raised concerns with the BHA. And as a result, complaints about the facilities were raised. The attendance was immensely discouraging. After operating for a few months, the authorities put it under administration.

Soon after, BHA withdrew its license due to several incomplete facilities. This dampened the moods of many racegoers in the county of Essex. At the time, the nearest racecourse in Essex County was 50 miles away, making it a great inconvenience.

The administrators would proceed to advertise the grounds in the hope of finding a buyer. Unfortunately, most deals that came their way fell through. RBS was the ground’s main creditors. At some point, they considered finding other uses for the ground in a bid to recoup their money. To their surprise, this was not easy either.

A few years later, a syndicate managed by Fred Done, the owner of Betfred, bought the racecourse. The new owners quickly rebranded it and opened it in 2015. Since then, this racecourse has been thriving.

Some of the notable events taking place on this ground include the fan-favourite Chelmsford City Cup. However, other well-loved horse racing events bring thousands of fans to this racecourse each year. During its first year in operation under its newly rebranded racing course name, the attendance stood at a staggering 80,000. Today, the racecourse is flourishing. 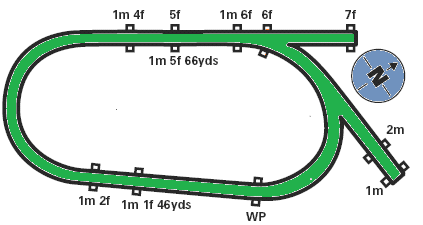 Chelmsford City is a flat racecourse. It is oval and right-handed. As such, it mounts an average challenge to both the horses and the jockeys.

The course has a well-groomed all-weather Polytrack. Jockeys complained about the quality of the track during its earlier days. Nonetheless, Betfred has done an incredible job with the course over the years. And its users seem to be satisfied by the new developments.

The racecourse’s modern design has received an overwhelming accolade from the jockeys, trainers, and fans. Today, the course provides a fair test to racers. Anyone could emerge as a winner on race days. You will not find many dominant winners on this course. This level of competition makes every race on its tracks tremendously exciting. You never know what’s going to happen during the race.

Due to the quality of the tracks on the this racing course, most renowned trainers like to train inexperienced racers on this ground. The ultimate goal is to ensure that the racers hone their skills on a world-class racetrack.

Currently, this course does not have major events. Regardless of that, it has the potential to host the biggest races in England soon. In addition to that, it is home to several notable all-weather championships.

The Chelmsford racecourse held its first listed race in 2018. This was the Queen Charlotte stakes. It was an exciting female-only event at the racecourse.  On top of that, the Chelmsford city cup, which takes place in August, has garnered massive traction over the years. Horse race betting fans look at it as a lucrative opportunity.

During the 2018 race, the top price for racers stood at a whopping £100,000.  And this became the 2nd richest all-weather class 2 racing event of its kind.

Where can you bet on Chelmsford racing?

With numerous races taking place at this racing track, punters have the chance to try their luck and win.

If you are looking for a convenient way to bet on Chelmsford races, look for an online bookie that features these races. You can rest assured that all online bookmakers cover the fixtures at this racecourse. To get started, go online and find a reputable bookie, check if they offer any horse race betting markets from this track. Once you ascertain that they do, sign up with them, fund your bookie account and start placing bets.

New 18+ UK customers only. Promo code SPORTS70. Deposit and place first sports bet of £10+ in one transaction, at cumulative odds of Evens (2.0)+. Qualifying bet must be settled before 23:59 on 03/01/2022. First bet must be on Sports. £40 in Free Bets credited within 48 hours of bet settlement. Max 30 Free Spins on Blue Wizard at £0.10 per spin. Bonuses have a 7-day expiry. Payment restrictions apply. SMS verification and/or Proof of I.D and address may be required. Full T&Cs apply.

New customers only; Min. deposit €15 (no Skrill/Neteller); Use bonus code PLAY10; Bonus amount is 100% of deposit up to €50; Offer can be claimed once per household; Wager the qualifying deposit and bonus amount 5x within 30 days to convert bonus winnings into real money; Wagers must be on min. odds of 1.80 on singles or combo bets with min odds. of 1.40 per selection to qualify; Max. stake contribution to wagering requirement is the value of your bonus; Terms and conditions apply; 18+

How to get to the course?

The Chelmsford racecourse has an excellent connection to the road network. While driving to this course, you can access it from A120, A131, and the M11 road.

For those who prefer to travel by public means; you can use the train. Chelmsford and Braintree are the nearest train stations to the racecourse. Moreover, there are plenty of yellow taxis, which are actually the best transport provider for racegoers during race days.

There is ample parking for those who prefer to drive to the course. If you can get to the course early, you may benefit from the free parking at A131 bypass. The main parking is another great option for motorists. Its postcode is CM3 1QP. For the Blue Badge holders, there is a special parking lot near the ticket office.

Today, horse racegoers have the chance to place bets on various races from the racecourse. Besides that, you can follow the proceedings of various meetings or even make a trip to the grounds and cheer on your favourite horse.

The trainer with the most winners is Mark Johnston with over 20 more winners than his nearest rival, Michael Appleby. The following three trainers take up third, fourth and fifth position respectively; John Gosden, Stuart Williams, David Simcock.

Luke Morris has saddled the most winners at this track, although he has ridden twice as many runners than the second placed jockey, Adam Kirby. Oisin Murphy, Jim Crowley and Silvestre De Sousa round out the top five.

Ryan Moore has the best strike rate (33.33%) of all the jockeys that have ridden over 100 runners at this track.

Chelmsford is not a top tier racing track, therefore it will not have races on big days such as Boxing day, however as it is all weather, the races do take place more frequently during the non summer months of September, October, November, December, January, February and March. You can view races live on Racing TV (racing news channel). Racecards can be read on multiple websites including attheraces, racingpost, racingtv or the official racetrack web site.